Jon C. Ainbinder was born and reared in a Jewish home. His father was a successful shopping center developer.

While living in Chattanooga, Tennessee, unknown to his parents, Jon made a personal commitment to Jesus Christ. Naturally, they were surprised and upset, especially since Jon was only 12 years old. They advised that he take the time to learn more about his own religion before changing to another. To that end, he was encouraged to abstain from further Christian activities and commitments. However, Jon’s devotion was so strong that after the passage of some time, his parents became convinced of his sincerity and accepted his decision. Their mutual love was strong enough to withstand this test.

Upon graduation from high school, Jon went to college in Durango, Colorado. There he became involved in a good church. He was called to preach while attending this church. Jon made plans to enroll in a Bible college to prepare for the ministry, but his parents did not want him to go. After several months, Jon realized that he must honor his parents and do whatever they wanted him to do. He told his parents that even though he felt the Lord wanted him to become a preacher, he was willing to not go to Bible college if he could not go with their permission.

After his parents saw Jon’s sincerity and desire to honor them, they agreed to let him pursue his calling. Jon attended Bible college in Florida and graduated in 1986.

Jon and his wife, Mary Beth have two sons, Jonathan and Jared, and they live near Athens, Georgia. Jon’s philosophy of evangelism is that he wants to treat the church in the same manner that he wants others to treat his wife. The church is a bride, too. 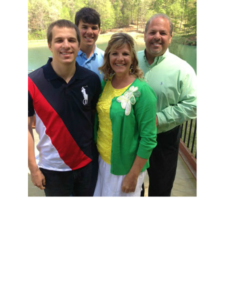 As individuals we look at the desperate needs around the world; the injustice, the poverty, the natural disasters, the prevailing philosophies, the deep cries for something more and we wonder how we make a difference? God has commanded us, His visible church in this generation, with the responsibility of sharing His great love and grace around the world. This is the passion of AEM. I have personally had the privilege to travel with Jon Ainbinder on numerous missions trips to Brazil. Not only have I seen the life changing power of Jesus Christ work in the lives of those that we have ministered to in the schools and the churches, but have seen God work in powerful ways in my own life as well. Through these trips, God has positioned each one to be a world changer to the nation of Brazil. I am thankful to have been a part of these missions trips for the cause of the gospel and glory of Christ, and look forward to future opportunities to minister alongside of Jon Ainbinder and AEM.

I used to think that through the service that I performed in my church that I was a useful servant of the Lord Jesus Christ. It only took a little time in Brazil to realize that I had been altogether unprofitable. God showed me through the people in Brazil what I was lacking in my Christian service. God took me 5,000 miles away from home to show me what it really means to serve Him. This trip has changed the way that I view evangelism and Christian service.

“I can no longer hide behind my church, my Pastor or anyone else and expect them to fulfill the Great Commission for me. As a Christian I have all of the resources needed to share the Gospel and to win souls for Christ. This was never more clear to me as when I went to Brazil on a missions trip with AEM. It’s not about us, it’s about the Gospel of Christ. That is the power of God unto salvation. Don’t say that you are scared, or nervous or that you can’t do it. Get past yourself. It’s not about you. Get the Gospel out and let God do the work. You will be amazed at how your witness will change.”

I fully recommend Jon to your ministry. I personally have seen his passion for the local Church and gospel mission for years up close. He is humble, humorous, and sincere. Your ministry will certainly be benefitted by his ministry.

I have known Jon Ainbinder for well over 10 years and have travelled with him to such places as Brazil for intensive evangelistic ministry. Jon is the real deal! I would encourage any Pastor or Church leader who seriously wants to reach the world for Christ to partner with Ainbinder Evangelistic Ministries and glean from his vast experience.

AEM is the best mission’s organization that I have ever worked with, being the most spiritually fruitful and exciting.

AEM Missions has reached thousands of people throughout Brazil with the Gospel. The church people and the people in the cities that we are in look forward to Jon and his teams coming to be with them. When they come back it is like a family reunion.

I found that if it is God’s will for you to do something He will put friends in your path to encourage you, have fun, and open your eyes to new exciting ideas and possibilities. He will never leave you hopeless or alone, but you must be willing to let Him guide you in all you say and do. I loved the trip to Brazil that my Mom and I went on with AEM.

Jon’s fresh and an encouraging gospel message has blessed our congregation for many years. A gifted brother with a real evangelistic heart.

Ainbinder Evangelistic Ministries, Inc. is a 501C(3) non- profit corporation and you will receive a personal thank you message for all of your donations. A receipt for tax purposes will be sent out every January.

You can choose either a one-time donation of whatever amount you feel lead to give or choose a monthly amount to donate.

100% of all your donations go to where you yourself choose them to go.

If you allow AEM to decide where to invest your contribution, it goes to the Mission field.

For $210 a month, you can sponsor a pastor or evangelist working with Ainbinder Evangelistic Ministeries

Give Online with Paypal Monthly

Give Online with paypal One-Time

Give Online with Stripe Custom Amount